Simply the best baking surface available for your oven or grill.  Nickel-free stainless steel  is bonded to hand-cast aluminum, giving you a hard cooking surface with unmatched heat capacity.  The BakePlate cooking surface is 16" by 16", with trimmed corners.  It's big enough for a 15" pizza,  a 7 lb. miche, or two batards.  The weight, at 18 lbs., is comparable to a 1/4" thick steel plate, but the BakePlate holds more heat and is much easier to handle.  The raised cooking surface allows you to easily grip the edges on all four sides (please don't try to move it while it's hot). The BakePlate holds more heat than 5/8" thick Cordierite baking stone and twice the heat of a 1/4" steel plate. We start with aluminum.  It's twice the cost of steel or cast iron, but we use it because, per pound, it holds close to twice the heat of steel or cast iron.  A steel plate holding the same heat as a BakePlate or PizzaPlate would weigh almost twice as much.  Instead of using multiple stones or steels to get a perfect crust, bake multiple perfect crusts on one BakePlate. The BakePlate isn’t just a flat plate.  An array of cross-shaped heat fins double the surface area on the bottom of the BakePlate.  The increased surface area lets more heat into the BakePlate, so it preheats and reheats faster.   A steel plate takes an hour to preheat.  A BakePlate takes only fifteen minutes longer, but holds twice as much heat. The heat fins also raise the cooking surface of the BakePlate off the oven rack, shelf or counter.  You can easily lift it from all sides.  It weighs almost 18 pounds, but it’s much easier to handle than a stone or steel plate.

Aluminum is great for holding and moving heat, but it’s not a great baking surface.   It’s too soft to hold up to a metal pizza peel, gets a little sticky at high temperatures and tends to scorch instead of brown.  We looked at many options before deciding on Series 400 stainless steel.  Known for its resistance to high-heat oxidation, it's melted then sprayed onto the cast aluminum, leaving a hard, durable surface that is perfect for baking. We took that hard, durable surface and went one step further.  We test-baked over 100 pizzas to create the perfect baking surface for your home oven.  Our SprayBrick surface gives you the crust you could only get in a brick oven.  On multiple pizzas. We pre-heated a 1/4" steel plate, a BakePlate and a popular $500 backyard propane pizza oven, then baked 4 pizzas in 30 minutes on each.  The same dough and toppings were used on all 12 pizzas.  After 1 or 2 pizzas, only the BakePlate made consistent, crisp on the bottom crusts.  Beating the steel plate wasn't a surprise, the BakePlate holds twice the amount of heat and has twice the bottom surface area absorbing more heat.  The propane pizza oven was the surprise disappointment.  Tremendous top heat, even on low we had to watch closely or the top of the crust would catch fire.  But underneath all that top heat is the same baking stone that doesn't make great crust in a home oven.  There's just not enough bottom heat to match the top heat.

I'm a pizza fanatic. I have a. . . . propane oven, a steel and a highly rated stone. When I got a BakePlate as a gift, I was pretty skeptical. Wow. The BakePlate outcooks them all. I tried the Italian Style pizza. The second time I moved the rack closer to the top of the oven and it was perfect. Top and bottom done perfectly. 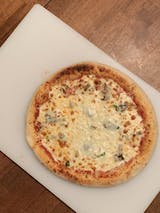 Last night I insisted on pizza for dinner just so I could put my BakePlate to the test. We were able to make all 6 of our pizza's in one sitting. The attached picture was the fifth pizza of the night. Not even with my last steel was I able to maintain such consistency on all of my pizzas.

Homemade pizza for me was good. Not great, but preferred over most pizza chains. I got my BakePlate yesterday and immediately started a dough. My kids each did their own (my youngest did the cheese pictured) and it was so much fun AND tasted amazing. I didn’t think much of the bottom crust before, but there is absolutely a difference. It’s amazing! Any pizza lover in your life can use this. I’m planning weekly pizza nights now. Too fun and too delicious. 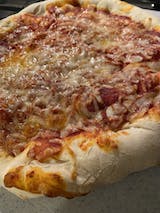 S
Stephanie F.
What was I waiting for

I have been making pizzas for almost every occasion since college (homemade dough, homemade sauce, every combo imaginable) and thought I had perfected the crust using an old beat up pan. A friend insisted I borrow her bakeplate just to try it. I’d monkeyed with pizza stones in the past and was never totally satisfied. I foolishly let it sit on the counter for weeks of quarantine before until using it. But wow...this Bakeplate is AMAZING and worth every penny. My husband wouldn’t even touch the second pizza I had simultaneously cooked in a regular pan. He thought it would be disrespectful to the delicious pizza the Bakeplate had enabled. Crust was absolutely perfect after preheating to 500, and sliding it on and off the plate with a wooden tray and some cornmeal was easy! YUM. buy one now. 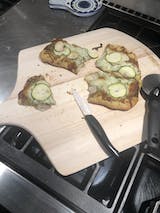 I am an experienced cook, but a novice baker. I've always wanted to make homemade pizza but never felt like I had the right tools. The BakePlate is super easy to use and I was cranking out amazing thin crust NY-style pies the first time I used it. Preheated oven to 500 with BakePlate inside, then turned on top broiler and voila.... killer pizza, evenly baked with perfect amount of crispy crust in 3-5 minutes in my oven. I've not had better pizza from a home kitchen ever.